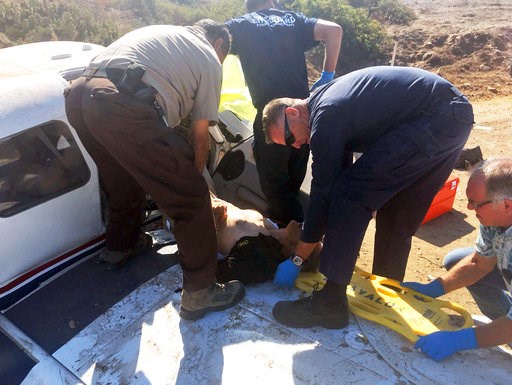 AVALON, Calif. (AP) – Three people were injured in a plane crash Wednesday at the notoriously tricky airport on Catalina Island off the Southern California coast.

One person severely injured in the 9:30 a.m. crash was taken to the hospital in critical condition, while two others had moderate injuries, Los Angeles County fire spokesman Marvin Lim said.

The Los Angeles County Sheriff’s Department said in a tweet that all three people are OK, and it posted photos of the partially crumpled plane in a dirt area and first responders treating a man.

The airport’s website says the runway where the crash happened begins at the edge of a 1,500-foot (2,410-kilometer) cliff, making it similar to landing on an aircraft carrier in the sky.

The site warns pilots that there’s a strong downdraft as planes approach the end of the runway and an uphill slope that can cause “approach and flare problems.” There are no visual cues to determine altitude, and pilots must rely on altimeters, the airport says.

Most flying clubs require pilots landing for the first time at Catalina to be accompanied by a pilot with experience there, the airport says.

It’s unclear how much experience the pilot in Wednesday’s crash had at landing at the airport.

Copyright 2018 The Associated Press. All rights reserved. This material may not be published, broadcast, rewritten or redistributed.