After a long wait, Mighty No. 9 tries real hard, but no

I’m at a convention, and across the hall I see a guy in a blue robot suit. It’s Mega Man! I make my way...

I’m at a convention, and across the hall I see a guy in a blue robot suit. It’s Mega Man! I make my way over to get a picture, but as I approach I see that the color’s not quite right, the helmet is rough-cut cardboard and he’s wearing blue jeans. Awkward. Well, since I’m already here I might as well take Mighty No. 9‘s picture.

We felt that same rush of excitement back in 2014, when Keiji Inafune announced he was going to make his own Mega Man game, Mighty No. 9. “Here’s The Mega Man Spiritual Successor You’ve Always Wanted,” our headline read. “It’s basically Mega Man with a new name,” we said, which sounded like a wonderful thing.

Mighty No. 9 built up a rather massive store of excitement (and several million dollars in cash) during those first few months, but each delay, work-in-progress gameplay clip and rough beta test sapped enthusiasm for the project. As it turns out, this was the game development equivalent of letting us down easy.

Mighty No. 9 tries real hard, but no

Mighty No. 9, released yesterday for most of the platforms it was promised to, is not Mega Man with a new name. It shares a lot of ingredients with Mega Man, but these are lower quality ingredients combined with none of the finesse of Capcom’s classics.

Here’s the introductory level of Mighty No. 9, played on PC with all settings maxed.

My fumbling first attempts at playing aside, these opening moments showcase some of Mighty No. 9‘s more glaring flaws—the atrocious voice acting, the unexciting cutscenes presented in the most basic way possible, textures that range from “fine” to “how did that wind up in the final game?” 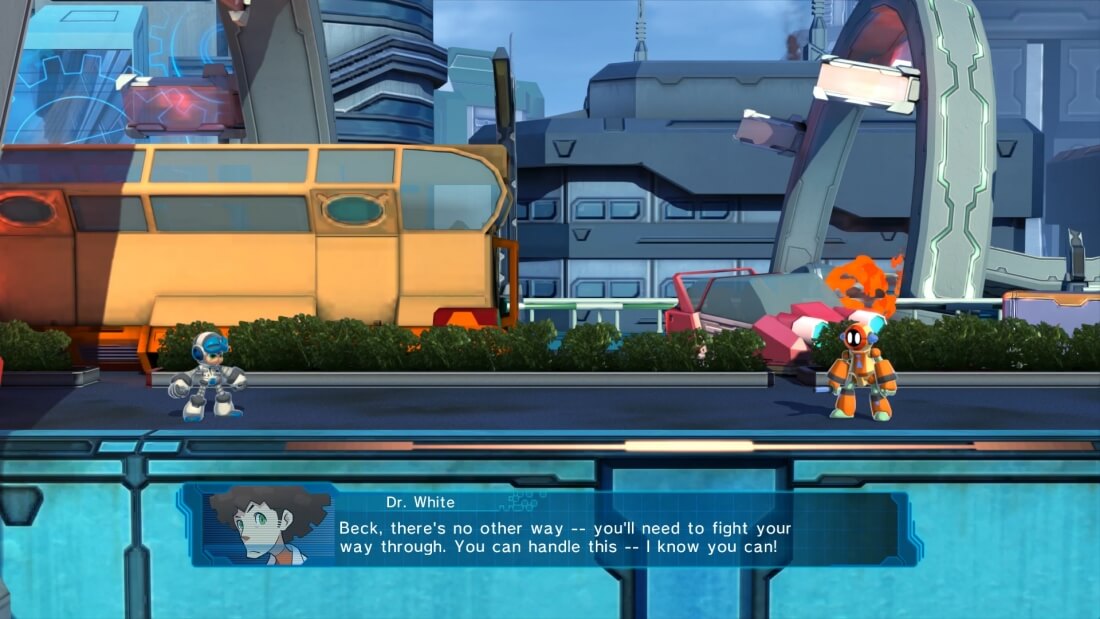 Look at that bus. Look at it. It’s hideous. What is with that bus?

Look at our hero, Beck. When Inafune introduced us back in 2014, he was a dashing, dynamic figure. 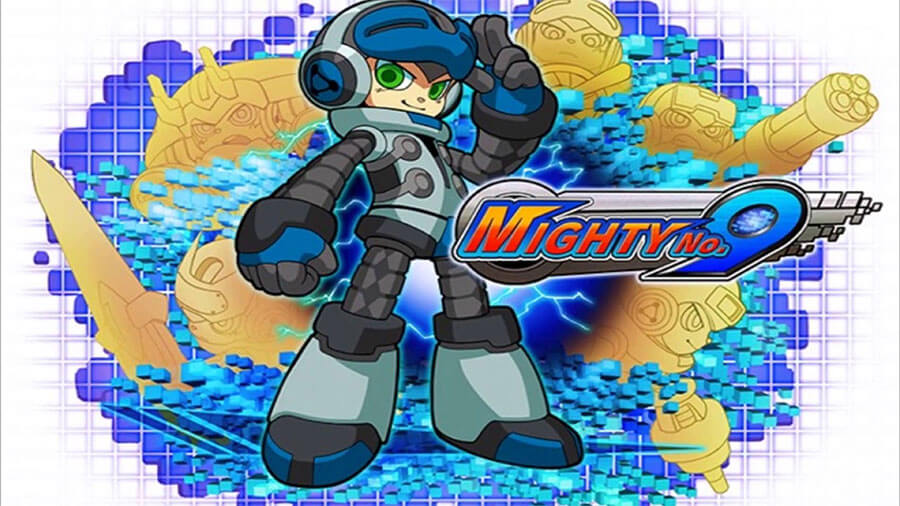 In game, Beck isn’t quite as dynamic. He still dashes quite a bit, thanks to a core game mechanic that pulls Mighty No. 9 even further afield from the Mega Man revival we were hoping for, but his character model just doesn’t live up to the swagger of the concept art. 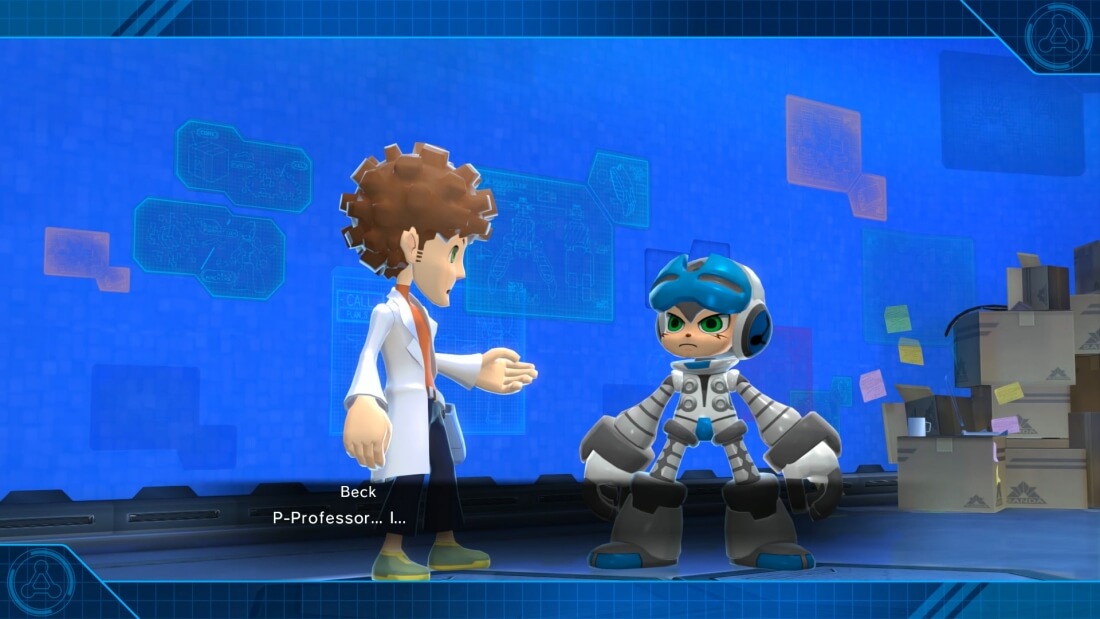 He kinda reminds me of a robot Monchichi.

The whole affair feels less like a $4 million (or whatever was left over) studio title and more like an ambitious fan game that created a bunch of awesome art but lacked the skills or resources necessary to translate that art into video game form. It’s like a Mega Man fan film.

Someone looked at this muddy water and said, “Yeah, that looks good.”

But that’s all aesthetics. Let’s talk gameplay. The basic mechanics of Mighty No. 9—running, jumping, shooting and dashing—are solid. In the right circumstance the game is easy to control, and during moments when the dash-driven, enemy absorbing combo system comes together, it can actually be quite fun. It just doesn’t come together nearly as often as I would like.

This bit was fun. I will always remember this bit.

The biggest deviation from the Mega Man formula here is the dash-combo system. Beck damages enemies, then dashes through them to finish them off. Dashing through enemies in succession generates combos. This is a major component of the game. You can tell by the size of the numbers popping up on the screen. “This is important,” the numbers say.

In some stretches of some levels, the enemies and architecture line up in such a way that this system really shines. But most of the time my flow is interrupted by obstacles or hazards or other things that felt like they were put in place to make sure I didn’t get too used to being a bad-ass dashing robot. I wanted to be Mega Man, but failing that I wouldn’t mind being a bad-ass dashing robot all of the time. 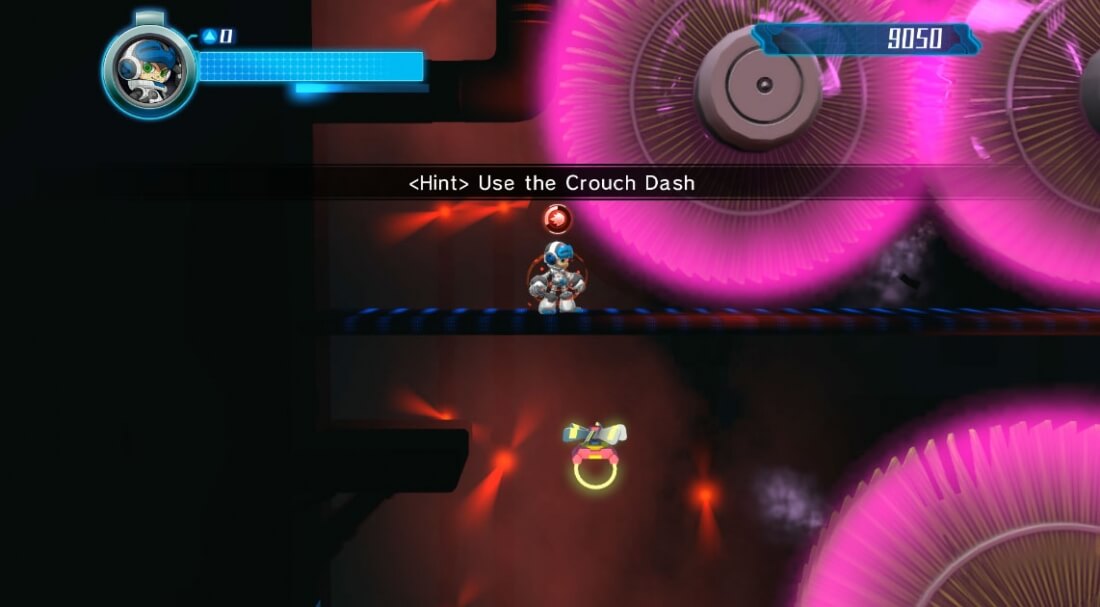 I should not need this prompt to remind me that a move exists deep into a level.

The most Mega Man-ish aspect of Mighty No. 9 is the evil robot masters, or in this case corrupted robot friends. Once the opening level is completed, Mighty No. 9 can fight Mighty No. 1 through 8 in any order he sees fit. Defeating them gives Beck access to their particular power, from the self-immolation of not-Fire Man to the explosive rounds of not-Tank Man.

Boss battles are all about knowing fight patterns, and some fight patterns are easier to discern than others. Flame boss Pyro took me three tries. Electric boss Dyna took me so many tries that I wound up going into game options and upping the “Lives Remaining” from three to nine. I love a challenge as much as the next person, but there’s only so much time in the day to go restarting an entire level.

I’ve been working through the Mega Man Legacy collection on the PlayStation 4 over the past couple of weeks, teaching my children how we used to do it in the good old days, along with several colorful new curse words. To an extent this has steeled me against the difficulty spikes and cheap deaths in Mighty No. 9. If I miss a jump and fall to my death I have to start over from a distant checkpoint? Fine. I made it to the boss with a single life left and have to start the entire level over again? I understand. How else am I going to learn?