AIG announced a break-up plan on Monday, saying it would split its life insurance business from its larger property and casualty arm, less than...

AIG announced a break-up plan on Monday, saying it would split its life insurance business from its larger property and casualty arm, less than four years after fighting off an attempt by activist investors to force it to do just that.

The company also said that Peter Zaffino, the 53-year-old head of the property and casualty insurance unit, would succeed Brian Duperreault, 73, who has been group chief executive since May 2017 and would become executive chairman.

AIG did not give details of how the break-up would be structured, but its management and board “believe a simpler corporate structure will unlock significant value for shareholders”, Mr Duperreault said in a statement.

The life insurance and retirement services unit accounts for about one-third of revenue at AIG, which has a $27bn market capitalisation.

Investors and analysts have been urging the company to consider such a split for years, and two activist hedge fund managers, John Paulson and Carl Icahn, agitated for the move from 2015 to 2017, taking large stakes in the company and even briefly taking seats on its board.

AIG is the only US-listed insurer combining life and property and casualty units, making it difficult to compare with peers and depriving it of a natural investor base.

UK’s Prudential is also seeking to split off Jackson, its US life business, under pressure from the activist investor Daniel Loeb.

Mr Duperreault has been given credit for returning AIG to profitability, after earlier struggling to repair a business and reputation tarnished by the financial crisis, when it made disastrous derivative trades in the housing market, leading to a federal bailout. 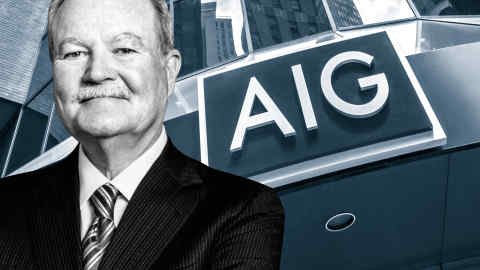 By de-risking the insurance portfolio and being disciplined on pricing, the company was profitable on a full-year basis in 2019 for the first time since the crisis.

Mr Zaffino has long been seen as the heir apparent to Mr Duperreault, who hired him away from Marsh and McLennan just a few months after taking the top job.

AIG shares are down about 40 per cent this year as the pandemic has caused interest rates to fall, crimping profits. The shares rose more than 6 per cent in after-hours trading on Monday.