Las Vegas Sands has agreed to sell the operations and real estate of marquee resort and casino the Venetian for $6.25bn, just over a...

Las Vegas Sands has agreed to sell the operations and real estate of marquee resort and casino the Venetian for $6.25bn, just over a month after the death of the gambling company’s controversial founder, Sheldon Adelson.

Apollo, the US private equity group, is set to run the resort on the Las Vegas Strip after agreeing to buy the Venetian’s operating company for $2.25bn, while VICI Properties, a real estate investment trust, has reached a deal to buy the real estate and land for $4bn. Apollo plans to enter a long-term agreement with VICI to lease the property and land.

The deal is a big bet by Apollo on Las Vegas making a strong comeback from the pandemic. The US private equity group has been one of the biggest winners since the coronavirus outbreak, since it was partly helped by central bank stimulus that wiped out investment losses it recorded early in the pandemic.

Alex van Hoek, an Apollo partner, said that the investment “underscores our conviction in a strong recovery for Las Vegas as vaccines usher in a reopening of leisure and travel in the United States and across the world”.

Apollo’s market value has roughly doubled since the lows of a year ago, giving the New York-based investment company confidence to buy or lend capital to distressed groups badly hit by the pandemic, including travel website Expedia and Mexican airline Aeromexico.

Gaming has long been a sector of interest for Apollo. It acquired the biggest US gaming empire, Harrah’s Entertainment, in 2008 with rival buyout group TPG for $31bn, although the company, which was later renamed Caesars, subsequently went into bankruptcy.

Apollo had been looking for a while to further expand its gaming business, and Las Vegas Sands had been exploring a sale of some of its assets before Adelson died.

Last July, on an earnings call, Adelson predicted that Las Vegas would bounce back strongly from the pandemic. “My over 70 years of business experience are the basis for my unbridled optimism that people will travel again, shop again and come together again to enjoy entertainment and social interaction to exchange ideas and to conduct business,” he told analysts. 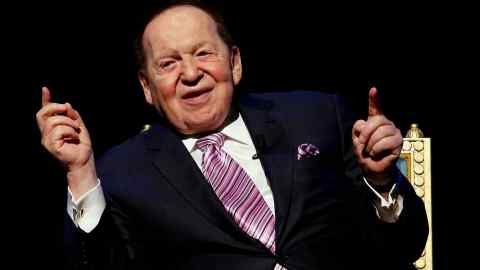 Other industry chief executives have echoed his optimism, with Matt Maddox of Wynn Resorts telling the FT recently that he expected Las Vegas to benefit from another “roaring twenties”.

Adelson, a prominent Republican donor and supporter of former US president Donald Trump, opened the Venetian in 1999 on the site of the Sands, a Rat Pack-era casino he had bought a decade earlier from Kirk Kerkorian. With a theme inspired by his honeymoon in Venice, the resort catered from the start to a lucrative conference-going clientele of business travellers.

Selling the Venetian will move the focus of Las Vegas Sands to Asia, where it became one of the largest western companies to open casinos in Macau almost two decades ago.