Australia has shipped vast quantities of coal and gas to fuel Asia’s rapid growth for decades. But amid global concerns over climate change, investors...

Australia has shipped vast quantities of coal and gas to fuel Asia’s rapid growth for decades. But amid global concerns over climate change, investors and a previously sceptical Conservative government are now backing plans to build a renewable energy export industry to help diversify its economy.

Last month the Australian government awarded “major project status” to Sun Cable, a A$22bn (US$16bn) solar power project in Northern Territory, a remote region more typically known as a source of liquefied natural gas. The designation aims to fast track construction of the world’s largest battery, a solar farm and a 3,700km electricity cable to supply A$2bn a year of green energy to Singapore by 2027.

“We are creating a new industry by building these high-voltage direct current submarine cable networks that enable the development of massive scale renewable energy, wherever the resource is most abundant,” said David Griffin, chief executive of Sun Cable.

“Ultimately we are looking at a network that extends from India to New Zealand.”

Despite a bruising decade-long political debate in Australia over the future of fossils fuels, the Liberal-National government has begun preparing for a future without its A$55bn-a-year coal industry.

Sun Cable is one of several green energy export projects planned in Australia, which is deploying solar and wind capacity at a rate four to five times faster than in the EU, US, Japan and China on a per capita basis, according to a report by Australian National University.

Macquarie Bank and energy groups Vestas, CWP Energy and InterContinental Energy are backing the Asian Renewable Energy Hub, a rival project, which aims to use wind and solar power in Western Australia state to make hydrogen products for export to Asian markets.

In Victoria, the government is co-funding a A$500m pilot project to generate hydrogen from coal and store the emissions produced in an undersea basin.

“As technologies change, we can capitalise on our strengths in renewables to continue to lead the world in energy exports,” said Angus Taylor, Australia’s energy minister, when announcing Canberra would support Sun Cable in gaining state and federal approvals.

Proposals to export renewable energy across vast regions date back at least a century when German architect Herman Sörgel proposed building a hydroelectric dam across the Strait of Gibraltar. Sharp falls in solar and wind costs and technical advances in cabling are turning this vision into reality. The UK, for example, is constructing the longest subsea power cable in the world — a €2bn electricity interconnector to Denmark, which stretches for 765km with a capacity of 1.4GW.

Sun Cable’s proposed cable is almost five times that length and double the capacity of the UK’s Viking Link, which would enable it to supply a fifth of Singapore’s total electricity demand. It must be laid at a depth of 1,700m below sea level — eight times that of the UK-Denmark interconnector — which will pose technical and financial challenges.

“For such long distances it is quite likely we have to go for multiple lines increasing the cost and complexity,” said Srinivas Siripurapu, chief R&D officer at Prysmian, a world leader in subsea cabling.

He said the deepest cable sits at depth of 1,600m, linking Sardinia to the Italian mainland but Prysmian is developing new technology that can go down to 3,000m. 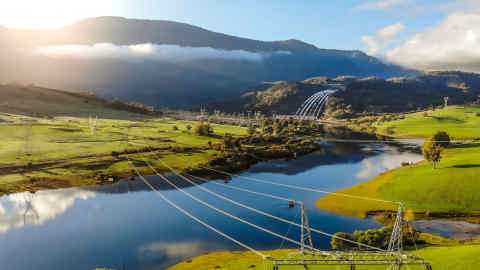 The Asian Renewable Energy Hub initially planned to build a subsea cable to supply Indonesia with green power generated at massive 15GW solar and wind farms based in the Pilbara, a desert region in Western Australia. But it changed its approach about two years ago due to the estimated A$20bn-plus costs and because it limited the customers it could supply.

“We’ve pivoted our vision to exporting energy in chemical form primarily in the form of hydrogen derivatives including ammonia,” said Andrew Dickson, development manager. “Shipping product means we have a much wider range of potential customers.”

The hub plans to use low-cost renewable energy to make green hydrogen and ammonia, which can be stored and transported to energy hungry markets such as South Korea and Japan.

Mr Dickson said ammonia can already be used in coal-fired power plants to reduce emissions by a fifth and there were opportunities in multiple sectors from power generation to shipping fuels.

The hub plans to sell power to iron ore mines and LNG facilities in the Pilbara to “unlock electrification at a large scale” and provide extra revenue to help it realise its export potential, he added.

Both projects must still prove to investors they are bankable and the technical challenges are not insurmountable. But advocates believe Australia’s abundant wind and solar resources and the pace of technological development puts the nation in pole position to create a viable renewables export industry.

“We have a rich energy export history and renewables is our next big step,” said Mr Cannon-Brookes. “We have the technology. We have the economics. And we have an opportunity to become a renewable energy superpower.”