Climate-action advocates are taking prominent roles in departments that will reset US energy policy under President Joe Biden, marking a sharp break from a...

Climate-action advocates are taking prominent roles in departments that will reset US energy policy under President Joe Biden, marking a sharp break from a Trump administration peppered with former industry lobbyists.

“There are no real fossil-friendly centrists in the bunch,” said Kevin Book, managing director at ClearView Energy Partners, a research group in Washington. “They’re all somewhere between what we would call green pragmatists and progressive climate activists.”

You have a broad, diverse array of people with experiences that are consistent with the coalition of Democrats that elected Joe Biden

The appointees — none of whom require Senate confirmation — included Robert Cowin, a former climate official from the Union of Concerned Scientists, an environmental group, and Shuchi Talati, an adviser to Carbon180, an organisation that promotes ways of sucking carbon dioxide out of the atmosphere.

Mr Biden’s energy department will also include engineers, a former diplomat and a former official of the Los Angeles chapter of the electrical workers’ union — Jennifer Jean Kropke, the new director of energy jobs.

“You have a broad, diverse array of people with experiences that are consistent with the coalition of Democrats that elected Joe Biden,” said Frank Maisano, partner in the Policy Resolution Group at Bracewell, a legal and lobbying firm that represents energy industry clients. “The one major consistent theme you see, though, is all have a commitment to advancing an agenda that can address climate change as quickly as possible.”

Mr Biden made addressing climate change a plank of his campaign, contrasting his agenda with four years of environmental rollbacks under Donald Trump — who named a former oil lobbyist to head the interior department and a former coal lobbyist to run the Environmental Protection Agency.

Hours after his swearing-in on Wednesday, Mr Biden committed to return the US to the Paris climate accord and ordered every federal agency to “immediately commence work to confront the climate crisis”.

Among other political appointees who will carry out Mr Biden’s agenda are several Obama administration veterans who left government to battle the Trump administration’s deregulatory actions in the courts. For example, David Hayes, who had served in Barack Obama’s interior department, headed an environmental law centre at New York University before being invited to join the Biden White House as special assistant for climate policy.

By contrast, Mr Biden seems to have put a greater premium on people with political experience to head departments dealing with climate change. Such nominations also require Senate approval. 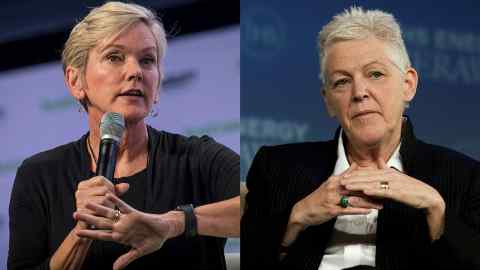 Michael Regan, nominated as head of the EPA, has a background in activism and government. After leading clean-energy efforts at the Environmental Defense Fund, an advocacy group, he became secretary of North Carolina’s department of environmental quality.

“Some of the high-level picks are really politicians, friendly faces who can sugarcoat some of the bitter pills that the administration’s going to be handing out,” he said.