Birkenstock, the family-owned German company known for its sturdy sandals, is exploring a sale to private equity group CVC in a deal that may...

Birkenstock, the family-owned German company known for its sturdy sandals, is exploring a sale to private equity group CVC in a deal that may value it at more than €4bn including debt.

Buyout group Permira and at least one other private equity group have also expressed interest in buying Birkenstock, people briefed on the matter said.

The company, which traces its roots to 1774, has been exploring a sale for months with the help of bankers at Goldman Sachs, according to two people with direct knowledge of the matter. After initially seeking interest from rivals in the industry, it has turned to private equity bidders.

While talks with CVC have been going on for months, a final deal is not imminent, one of the people said, and there is no certainty that an agreement will be made. The status of talks with Permira was not clear.

CVC hopes to grow sales in new markets while capitalising on the brand’s loyal customer base, a person close to the deal said, adding that its executives believed that Birkenstock’s popularity was less likely to fluctuate with fashion than that of Dr Martens, which Permira owns and is planning to list. 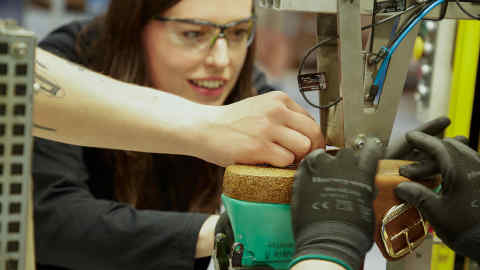 The deal would mark the latest private equity deal involving a European shoe business, after Permira bought luxury sneaker group Golden Goose from Carlyle in February. Permira and German buyout group Triton last year circled US sports outfitter Reebok, which has been put up for sale by its German parent company Adidas.

Birkenstock employs 3,800 people and made €721.5m in revenues and €129m in net income in the year to September 2019, a corporate filing shows. Net profit was up 40 per cent on the previous year.

The company’s shoes are produced at a factory in Görlitz, Germany, which operates three shifts so that footwear can be manufactured 24 hours a day. It started selling shoes directly to consumers online in 2016.