Chow Khai Shien moved to Australia five years ago in search of an education and a better life. But his new life was snuffed out...

Chow Khai Shien moved to Australia five years ago in search of an education and a better life. But his new life was snuffed out last month when a stolen car smashed into the 36-year-old Malaysian’s scooter as he made a delivery for DoorDash, one of the world’s biggest gig economy companies.

“It was heartbreaking when I confirmed . . . that he was completing a delivery when the accident happened. My brother’s life is basically gone and all for the price of a cup of coffee,” Chow Khai Sing, the dead rider’s sister, told the Financial Times.

Five delivery drivers have died in accidents in Australia in the past two months, sparking a debate about regulating the gig economy at a time when it is enjoying a surge in demand following Covid-19 lockdowns.

Some critics in the opposition Labor party accuse the government of failing to act because most delivery riders are migrant workers with little political clout, rather than Australians. The party wants to establish an independent tribunal to set pay and conditions across the entire transport sector, including gig economy companies, to improve safety standards.

Gig economy companies have largely avoided workplace regulations and recently overturned a pioneering law in California which bolstered workers’ rights by labelling them employees rather than independent contractors. But analysts said that if Labor’s proposals were adopted, Australia could serve as a template for other nations.

Trade unions support the proposal, which is modelled on an existing system in Australia’s most populous state New South Wales covering independent truck owners. It bypasses the need to reclassify contractors as employees while enabling workers to band together to request better pay and conditions.

“California’s example should be a warning to Australia to not go down the path of giving rights based on whether a rider qualifies as an employee or not,” said Michael Kaine, the national secretary of the Transport Workers’ Union, who has called for a national inquiry into deaths in the sector.

While Canberra has been unwilling to act, state governments in Victoria and New South Wales are considering new rules. Advocates for regulation are hopeful the Labor-led government in Victoria will lead the way.

“Many Victorians use and benefit from the gig economy, but for too long we’ve allowed convenience to get in the way of a fair go for workers,” said a Victorian government spokesman.

“Our landmark gig economy inquiry has identified some of the ways to change that, and we will respond to those recommendations in due course.”

Low wages, the precarious nature of gig economy work and the pressure to deliver on time formed a lethal combination for workers with no rights, they said.

“Because there are no minimum rates, riders often have to work across multiple apps so they can pay their bills and they are constantly getting warned by their companies that they will get sacked if they are even a few minutes late with an order,” said Mr Kaine.

“The companies they work for don’t care if they live or die so long as they get food to customers on time.” 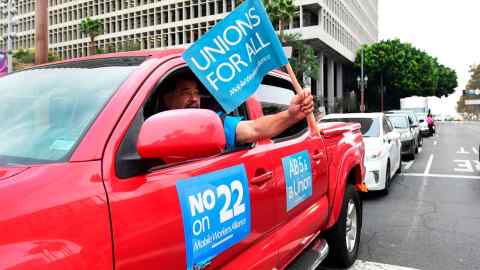 The technology companies rejected the trade unions’ claims, insisting that health and safety of riders were a priority. But they warn that classifying contractors as employees — a move that would entail a minimum wage and workplace rules — would undermine consumer choice and cost jobs. Most contractors, they said, wanted the flexibility provided by gig economy employment.

DoorDash told the FT it was deeply saddened by the death of Chow Khai Shien and had paid his funeral expenses. It said it was also providing financial support to his family.

“In every market we operate, the health and safety of our community is a top priority,” said the company.

However, his family said the industry needed to do more to support delivery riders. His sister said all gig economy companies should provide accident insurance to cover riders and ensure they retained riders’ emergency contact telephone numbers. DoorDash was unable to contact the family until two days after her brother’s death.

Following the deaths of two of its delivery riders over the past four days, Uber Eats said the industry needed to do more to improve road safety, although refrained from naming specific measures.

Uber Eats is providing insurance cover to delivery riders and has called on other platforms to offer the same protection, although unions said the cover fell short of usual standards in Australia.

Experts on workplace relations warned that the recent deaths highlighted the dark side of “platform capitalism” and regulation was needed.

“This may look ‘entrepreneurial’ and ‘innovative’ . . . until something goes wrong, of course, and then it’s a swift step back into the dark ages as injured workers and their families are left to deal with the costs alone. No holiday pay, accident insurance, minimum wage or safety checks?” said Peter Fleming, a professor at University of Technology Sydney.

“This really is a throwback to the fast and loose days of 19th century capitalism and all workers are ultimately hurt by allowing it to flourish in 2020, not just those in the gig economy”