Scott Atlas, Donald Trump’s most trusted coronavirus adviser, has resigned, bringing to an end a controversial tenure that epitomised many of the administration’s battles...


Scott Atlas, Donald Trump’s most trusted coronavirus adviser, has resigned, bringing to an end a controversial tenure that epitomised many of the administration’s battles with public health experts over how to deal with the pandemic.

Dr Atlas confirmed on Monday he would leave his post following a stormy three months during which he pushed the US president to oppose coronavirus mitigation measures, drawing condemnation from prominent scientists including his own colleagues at Stanford University.

In a resignation letter dated December 1, Dr Atlas wrote: “We identified and illuminated early on the harms of prolonged lockdowns, including that they create massive physical health losses and psychological distress, destroy families, and damage our children.”

He added: “Although some may disagree with those recommendations, it is the free exchange of ideas that lead to scientific truths, which are the very foundation of a civilised society.”

While Mr Trump has refused to concede November’s presidential election, repeating unsubstantiated allegations of electoral fraud, Dr Atlas appeared to accept the result of the vote. “I sincerely wish the new team all the best as they guide the nation through these trying, polarised times,” he wrote.

Many of his opinions and statements run counter to established science and, by doing so, undermine public-health authorities

Mr Trump appointed Dr Atlas, a neuroradiologist and senior fellow at the rightwing Hoover Institution, in August following a series of appearances on Fox News in which he praised the president for opposing state lockdowns.

Within the administration, Dr Atlas proved a vociferous opponent of lockdowns, arguing instead for a response that would protect the most vulnerable while allowing the disease to spread in the wider community until herd immunity was achieved.

That approach won support from the president but provoked anger from many prominent scientists including at Stanford University, home to the Hoover Institution, who warned it would put millions of lives at risk.

In September, 78 Stanford scientists signed a public letter stating: “Many of his opinions and statements run counter to established science and, by doing so, undermine public-health authorities.”

Experts have criticised the Trump administration’s resistance to lockdowns even as cases, hospitalisations and deaths in the US all climb to record highs. The number of people in hospitals with the virus as of Monday was a record 96,039, according to the Covid Tracking Project.

Dr Atlas also ended up at odds with his colleagues on the White House coronavirus task force and elsewhere in the administration who were sidelined as his prominence grew. 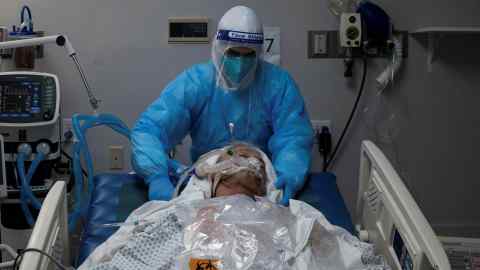 He angered officials at the US Centers for Disease Control and Prevention, for example, when he pushed for the public health body to stop recommending that people without coronavirus symptoms be tested even if they had been in contact with someone with the virus.

Dr Atlas also publicly contradicted his fellow task force members Anthony Fauci, the head of the National Institute for Allergy and Infectious Diseases, and Robert Redfield, head of the CDC, after they told Congress that 90 per cent of Americans remained susceptible to the disease.

That row erupted when Dr Redfield was overheard on a flight saying: “Everything [Dr Atlas] says is false.”

Angela Rasmussen, a virologist at Columbia University, said: “He managed to spread misinformation, and indirectly, based on his incompetence and ignorance about infectious diseases, thousands of cases of Covid-19.”

How is coronavirus taking its toll on markets, business, and our everyday lives and workplaces? Stay briefed with our coronavirus newsletter.