Facebook Pages Get Publishing Authorisation, New Requirements for Those Who Manage Pages

Social networking giant Facebook on Friday announced new features in an attempt to make Facebook Pages more authentic and transparent. One of the highlights...

Social networking giant Facebook on Friday announced new features in an attempt to make Facebook Pages more authentic and transparent. One of the highlights of the updates is Pages publishing authorisation, which will initially be rolled out to Pages “with a large audience in the US”. Other features that are coming to Facebook Pages include the addition of primary country locations from where the page is managed, and the ability to view when a page has been merged into another one.

Starting with better authorisation, Facebook states that it will now be tougher for page managers to post content on their page, as they will be required to use with two-factor authentication and confirm their primary home location before being allowed to post. This process is aimed at making it harder for pages to come under the threat of fake or compromised accounts. Enforcement of publishing authorisation will start later this month.

Apart from that, the Page History section will now show when a page has been merged into another one, offering more transparency and awareness for followers of both the pages. A new section called People Who Manage This Page is also being added that will show which countries are the managers from. 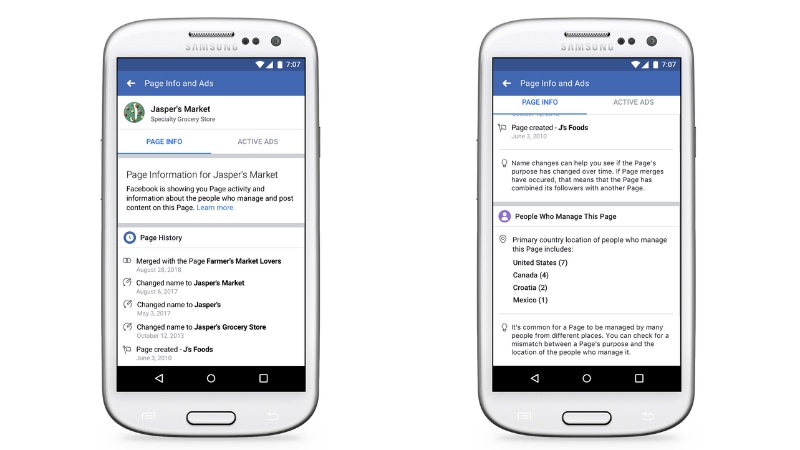 All these new features are currently being rolled out to pages in the US with a large audience, the size of which is unknown. That’s not all, Facebook-owned photo and video sharing app Instagram will also soon introduce similar features allowing users to see more contact information “accounts with large audiences”.

This development comes months after Facebook was caught up in a data privacy and fake news scandal surrounding the 2016 US Presidential elections wherein experts have alleged a major influence of the social platform in deciding the election results. While cutting down on suspicious news is the ultimate battle, these slight improvements to Facebook Pages are steps to make the readers aware and informed about certain developments.