Carlos Ghosn feared Renault would sack him if the true scale of his Nissan salary were disclosed, according to court testimony by the whistleblower...

Carlos Ghosn feared Renault would sack him if the true scale of his Nissan salary were disclosed, according to court testimony by the whistleblower who triggered the downfall of the former automotive supremo.

Hari Nada, the former head of legal affairs, was appearing in public on Thursday for the first time since Mr Ghosn’s arrest in 2018. He said the fear of Renault’s reaction drove Mr Ghosn to order Nissan staff to concoct a scheme that would conceal the full extent of a remuneration package that was the highest for a CEO of any Japanese company.

The allegations on Thursday emerged from what was widely expected to be the most explosive segment of the trial in Tokyo of Greg Kelly, Mr Nada’s former boss. Mr Kelly was arrested at the same time as Mr Ghosn and is now fighting charges that he helped conceal the ex-Nissan chief’s compensation.

When asked why Mr Ghosn wanted to reduce his disclosed compensation, Mr Nada told the judges: “He didn’t want to be fired. If he paid himself what he wanted and that was disclosed, the French state would have felt obliged to fire him.” 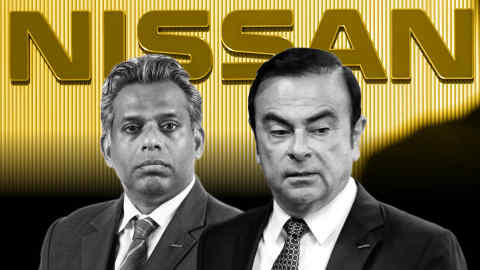 In addition to the comments around Mr Ghosn’s alleged motivation, Mr Nada’s long-awaited testimony threw new light on the extent to which Nissan and Renault were planning to convert their alliance into a full merger.

Previous accounts given to the Financial Times suggested that those talks did not become serious until about 2016. But Mr Nada testified that Mr Ghosn began planning for a merger from mid-2012.

The timing of merger talks is critical. Many believe that the threat of an imminent merger that would have disadvantaged Nissan prompted senior figures to begin in early 2018 the internal probe of Mr Ghosn. That probe ultimately led to his arrest by prosecutors and the downfall of the world’s most prominent automotive executive.

Mr Ghosn, who headed the Renault-Nissan-Mitsubishi Alliance and escaped from Japan to Lebanon in late 2019, has denied charges of under-reporting ¥9.2bn ($88m) in deferred compensation that the former chairman was set to receive over an eight-year period.

Nissan, which has also been charged with misstating Mr Ghosn’s remuneration, declined to comment.

Mr Nada’s explanation of events adds a new dimension to Mr Ghosn’s alleged actions. In 2010, a rule change in Japan forced executives earning more than $1m to disclose their pay — a move that triggered concerns of a significant domestic backlash against Japan’s highest-paid CEOs.

Since the arrests of Mr Ghosn and Mr Kelly, the role of their 56-year-old former colleague Mr Nada has been the centre of increasing speculation and mystery. The easy-mannered British-Malaysian lawyer, who had worked for Nissan since 1990, was identified shortly after Mr Ghosn’s arrest as a central figure in the events that preceded that bombshell moment, but his silence in the 26 ensuing months has been absolute.

Mr Nada, who said he advised Mr Kelly on how to reduce Mr Ghosn’s disclosed compensation, is also one of two former Nissan executives who signed a plea bargain with Japanese prosecutors ahead of Mr Ghosn’s arrest.

As a consequence, said people familiar with the situation, Mr Nada spent months being interviewed by prosecutors as they built their case against Mr Ghosn and Mr Kelly.