Gold hit $2,000 an ounce on Tuesday, a milestone that caps a record-breaking rally driven by depressed bond yields and fears over the impact...

Gold hit $2,000 an ounce on Tuesday, a milestone that caps a record-breaking rally driven by depressed bond yields and fears over the impact of Covid-19 on the global economy.

The 32 per cent rally this year has made gold one of the world’s best-performing mainstream assets, reflecting concerns among investors over the sustained number of coronavirus cases, particularly in the US, and the impact of trillions of dollars of stimulus from governments and central banks around the world.

“The root cause [behind the rally] is uncertainty,” said George Cheveley, a fund manager at Ninety One. “It’s uncertainty about whether the world plunges into recession next year or recovers, spurred on stimulus money.”

“When you think of both of those outcomes, gold has a place,” he said.

The surge in the price of the metal, often used as a haven in times of stress, stems in part from investor demand for gold-backed exchange traded funds, holdings of which have risen to record levels.

Investors stashed a net $7.4bn of cash into gold-backed ETFs last month, according to data from the World Gold Council — adding to the record $40bn they invested in the first half of the year.

Gold would benefit as bond yields continued to slide and inflation started to materialise, said Jim Luke, a fund manager at Schroders. US 10-year real yields, which take into account inflation, fell to an all-time low of minus 1.02 per cent this month. “We’re in a world where inflation will move above targets and real rates will be significantly lower than now,” Mr Luke said.

Typically, gold suffers a disadvantage relative to government bonds — another classic haven for nervous investors — because it does not offer dividends or interest payments. But aggressive easing from central banks, including vast bond-buying programmes from the US Federal Reserve, means that the returns available to new buyers of bonds are slim. The benchmark 10-year US government bond now yields close to 0.5 per cent.

Many government bonds carry negative yields, meaning buyers are guaranteed a loss if they hold the debt to maturity. That boosts the relative allure of gold.

Governments globally have announced $20tn worth of stimulus to combat the impact of coronavirus, according to Bank of America, a little over 20 per cent of global gross domestic product.

The bank said the impact of coronavirus and US-China tensions could push the gold price towards $3,000 a troy ounce in the next 18 months.

Gold is still under-owned by global investors relative to global stocks, according to the bank, with less than 3 per cent of their assets in the precious metal. In 1980, allocations were as high as 6.2 per cent, the bank’s analysts said.

“We still see ample scope for traders to consider increasing their gold holdings,” they added. 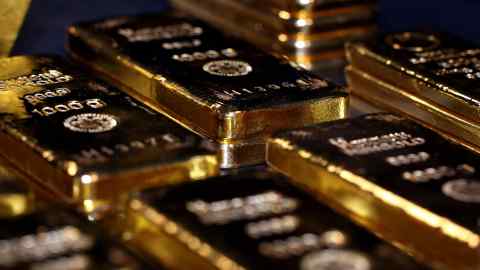 The gold price is still not an all-time high after taking into account inflation. Fahad Kamal, chief market strategist at Kleinwort Hambros, said that “when you factor in inflation, the all-time high of gold is about $2,500 . . . when Soviet tanks rolled into Afghanistan in 1979”.

Mr Luke at Schroders said the gold rally could have further to run as investors grappled with negative real rates and high stock market valuations.

“People who look at gold tend to get characterised as ‘gold bugs’ and some do have that kind of blind-faith mentality,” he said. “But what’s drawing investors to gold now is not faith in gold itself, it’s much more a lack of faith in other things — central banks, governments and, in particular, a lack of faith in the availability of real returns elsewhere. Gold is the inverse of that.”

Video: Gold is king but should you buy it? | Charts That Count