HSBC said it would consider paying a “conservative” 2020 dividend after Europe’s largest bank unveiled a better-than-expected third-quarter profit on lower provisions for bad...

The lender on Tuesday reported a 36 per cent year-on-year drop in pre-tax profits to $3.1bn for the three months to September, which was above bank-compiled analyst forecasts of $2.1bn. Noel Quinn, HSBC’s chief executive, labelled the results “promising”.

HSBC shares rose as much as 5.3 per cent in Hong Kong on Tuesday after the results were released, hitting their highest level in about two months.

HSBC cancelled its payout for the first time in 74 years earlier this year following pressure from the Bank of England, infuriating its Hong Kong shareholders. It said a 2020 payout would depend on the bank’s forecasts for 2021 and its consultations with regulators. “We will seek to pay a conservative dividend if circumstances allow,” Mr Quinn said.

The lender said it expected total loan losses to be closer to the lower end of the $8-13bn range it had earlier forecast for the whole year.

“This latest guidance, which continues to be subject to a high degree of uncertainty due to Covid-19 and geopolitical tensions, assumes that the likelihood of further significant deterioration in the current economic outlook is low,” the bank said.

The slower rate of new provisions in the third quarter came as the global economy tentatively reopened from strict lockdowns prompted by the pandemic.

This matched the trend last week at Barclays, which set aside an additional £608m, substantially lower than the £3.7bn reserved in the first six months of the year.

HSBC revenue fell by 11 per cent year on year to $11.9bn in the third quarter.

HSBC’s shares have plunged by more than 40 per cent this year as the lender struggles with the combined challenges of coronavirus, a UK regulatory ban on dividends, ultra-low interest rates and a confrontation between China and the west over Hong Kong, its most important market.

The bank said it expected to further cut costs. It would look to lower its original $31bn target for its annual cost base for 2022, adding it would release a “detailed and updated” transformation plan when it published its full-year results.

Mark Tucker, chairman, and Mr Quinn are re-evaluating a strategy unveiled only in February, preparing deeper cuts and exploring the sale of persistently underperforming businesses, such as its US retail arm, the FT has reported. 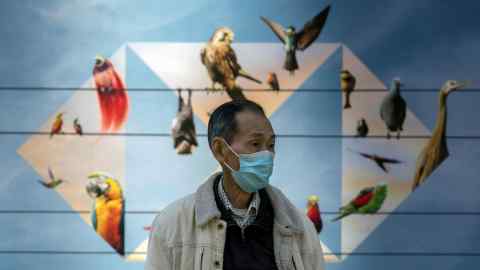 Mr Quinn said on Tuesday that the smaller fall in profits before tax for the quarter was in part due to the lower expected loan losses and “continued good cost management”.

HSBC said it expected to increase investment in Asia due to the region’s economies “rebounding strongly” from the pandemic. The bank said it would provide an update on the future of its French and US operations in February 2021.

The bank highlighted the passage of a national security law and US sanctions on 11 Hong Kong officials under a list of risks to its operations. The US has threatened secondary sanctions on financial institutions which fail to cut ties with the officials.

“The financial impact to the group of geopolitical risks in Asia is heightened due to the strategic importance of the region, and Hong Kong in particular, in terms of profitability and prospects for growth,” HSBC said.