I Spent a Week Yelling at Siri in Apple’s Latest OS, Sierra

Last week, at the annual news extravaganza/coding demo/Beats 1 jam sesh that is WWDC, Apple launched a new version of its desktop operating system....

Last week, at the annual news extravaganza/coding demo/Beats 1 jam sesh that is WWDC, Apple launched a new version of its desktop operating system. There was a funny slide about naming conventions, another California-centric name (Sierra) and a bunch of new features. And Craigy With The Good Hair announced a small but long overdue change: Mac OS X is now called macOS.

One day after the event, not two minutes after booting up a MacBook Pro that Apple pre-loaded with a preview build of macOS Sierra, I asked Siri some existential questions. (As you do.) Then I asked which version of OS X she was running, expecting a gentle chiding about macOS and silly questions. Instead, she said, Your Mac has OS X 10.12 (16A201w) installed. Poor Siri doesn’t even know where she is! She was still happy to help me buy drugs, though, so that’s something.

I’ve been using Sierra for about a week now: in my apartment, at my desk, and in the office. Basic “this is water“-esque problems aside, I really like having Siri on my Mac. I wasn’t sure how I’d feel talking to my laptop, especially in an office full of judgmental coworkers who communicate silently, through Slack. After a couple of hours, though, it felt almost natural. Natural to me, anyway: Everyone around me still thinks I’m talking to them when I’m talking to Siri, and it’s hard to overcome the shame of sitting in a coffee shop shouting “WHAT TIME IS IT IN BANGKOK” at my laptop. OK, so maybe it’s not really natural. But it is definitely useful. Even just a few days in, Siri already feels like a core component of how I laptop—even more than how I smartphone.

As to the rest of macOS, well, that remains to be seen. Many of the operating system’s best features don’t work yet, and those that do require everyone else updating to the new OS as well. And it’s not like macOS is a huge leap forward in computing—Apple’s made everything neater, tidier, and easier to use, especially if you also use an iPhone. But name change or not, when it comes out this fall, your Mac will still feel like your Mac. Except you can talk to it now.

Siri is the big step forward in macOS. This isn’t the same Siri you’ve used (or tried to use) on the iPhone. Siri for Mac can handle multi-step searches, for instance, like “What time do the Warriors play?” followed by “What channel is it on?” It also feels Mac-specific in clever ways, and more thoroughly integrated. You can search for files, sorted by date or tag or filename or anything else you can think of. If you’re an obsessive file-organizer, Apple just rewarded your meticulousness. You can save searches for easy access later, and even drag and drop things right out of the window in the top right corner.

You can look up sports scores, send tweets, or—this is my favorite feature—use Siri to tweak system settings without diving into the hilariously impenetrable System Preferences menu. “Siri, open keyboard settings” does the job. I’m not filling in Excel spreadsheets or dictating articles to my assistant (yet), but at least Siri handles the other stuff so I can focus. And isn’t that what a good assistant does?

Siri is neither good nor socially acceptable enough to make the Mac’s keyboard and trackpad nervous. It’s great in spots, though. There’s lots of research on the cognitive costs of task-switching, jumping between apps and windows every time you need anything. Tapping Fn-Space and saying “Remind me to pick up the laundry in 54 minutes” or “How many tablespoons in a cup?” gets a lot done without dragging me out of the task at hand.

Of course, Spotlight, the text box quick launcher that’s been part of the Mac since the days everyone called it OS X, does many of the same things. You could say they’re redundant, but I appreciate the choice. Talking is faster, but occasionally awkward or impossible. Siri would be better in general with a typing option—Spotlight isn’t quite that, but it does the job. 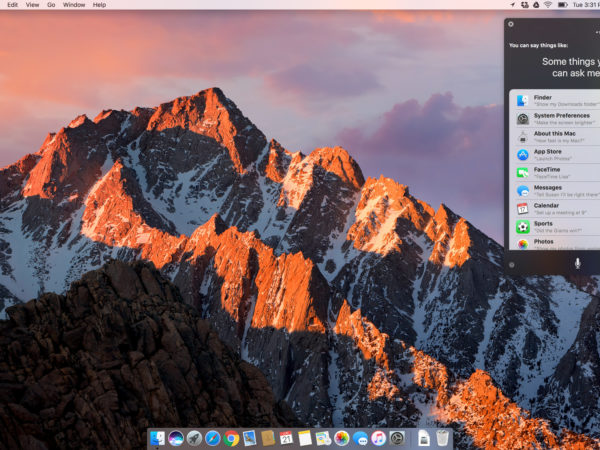 Beyond Siri, there’s not much to tell you about macOS Sierra because many of its best features don’t work yet. Auto Unlock, which lets you skip the password screen by authenticating your Mac with your Apple Watch, worked great in the demo I saw but won’t work for anyone else until the fall. Ditto Apple Pay on the web. I couldn’t test Universal Clipboard, which activates copy and paste across all your devices, because none of my devices have the updated software. I can send you big emoji and video links in the Message app, but you can’t see them until you have iOS 10. So many of Apple’s most progressive features depend on everyone updating their software ASAP. It’ll happen—Apple’s good that way—but not for a few months.

Here’s what I can tell you now, though. The picture-in-picture mode works only in Safari and only on a few sites, like Vimeo and ESPN, but I love it. Having a video float over whatever I’m doing without requiring gymnastic window-resizing is awesome. The new Apple Music design is bonkers, full of huge album art and even huger category titles, but better than before. iCloud Drive is finally useful, since it just hoovers up everything on my desktop and makes it available everywhere. The new features in Photos are more fun than I expected, especially Memories, which showed me the best photos from a trip I’d forgotten about and a neat highlight reel of the last three months of my photos. It’s neater than it sounds!

It speaks to the maturity of Mac software that the feature I appreciate the most is something I call App Tabs. Basically, Apple has made it possible for any app to open documents, photos, whatever in tabs instead of windows. Now I can work on five TextEdit documents in one place, flipping through them in the tabs bar instead of cluttering my screen with windows. Eventually, Apple says, every app will work like this—you’ll just have an Excel window with all your sheets right there. It feels as great as it did when everyone ditched a gazillion browser windows in favor of tabs.

You can install macOS Sierra right now, if you’re a developer or a regular person willing to pay $99 a year for an Apple developer account. Don’t, though. It’s not like you can do much with Sierra beyond talk to Siri anyway, and it still has some wonky problems. Like the one where it would just cut my Wi-Fi off every few minutes for no reason. Or the one where Siri just … crashes, and you must reboot your computer. Nothing to worry about, and there’s plenty of time left before the OS launches this fall. Just reason enough to wait.

When it does come out this fall, though, you’re going to want to upgrade. It’s free, it includes some security updates, and it’s not like Apple has nutty Windows 8-style ideas about changing everything at once. You can safely upgrade. You’ll want to, too: After using Sierra for a week I’m already missing picture-in-picture and tabs in apps. I’m really looking forward to Apple Pay on the web, unlocking my Mac with my Apple Watch, and sending gigantic emoji to everyone in my Contacts.

More than anything, now that I’ve stopped using the Sierra preview and gone back to my own MacBook, I miss Siri. There’s just no faster way to find that document I just signed than to just say, “Show me photos I edited today.” Siri belongs on the Mac. Even if she can’t always hear me.

Go Back to Top. Skip To: Start of Article.