Moderna is launching a trial of a new Covid-19 vaccine as the US biotech group warned that its current shot was less effective in...

Moderna is launching a trial of a new Covid-19 vaccine as the US biotech group warned that its current shot was less effective in tackling the strain that emerged in South Africa.

Laboratory tests show Moderna’s Covid-19 jab still works against the variant named 501. V2, which emerged in South Africa, and B.1.1.7, which was first discovered in the UK, the company said.

But it warned that the neutralising antibody response to 501. V2 was sixfold lower than to the original variant, raising concerns that immunity to it may wane significantly, particularly in older people.

Stéphane Bancel, Moderna chief executive, said the company was preparing for a “worst-case scenario”, even though he had “zero concerns” about the vaccine’s efficacy in the coming months.

“If something needs to be done in the summer, we’ll do something, but we cannot be late,” he told the Financial Times. “We don’t want the virus to win, we want the human race to win.”

The vaccine is still expected to protect recipients against both variants. Mr Bancel said the “good news” was that the vaccine still elicited more antibodies than were seen in people who have recovered from Covid-19.

Moderna is the first vaccine maker to announce a trial for a booster against a new variant, after having its initial jab authorised across the world including in the US, the EU and the UK. Its messenger RNA technology can be quickly adapted for new variants. If needed, the booster would be given to people who had already received the Moderna vaccine.

The rapid spread of the new variants is raising concerns about whether vaccines could tackle them, just as companies and governments began mass rollouts of the shots.

Moderna is publishing the first results of a lab test against the variant discovered in South Africa, giving a glimpse of a potential problem that could be faced by many vaccine makers. The results have yet to be peer-reviewed. 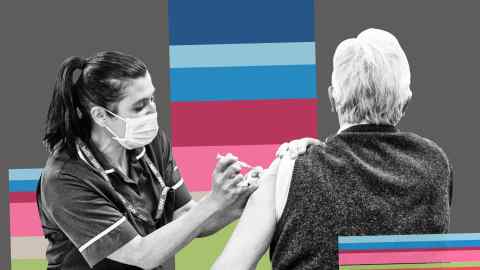 Johnson & Johnson, which has conducted some of the trials for its vaccine candidate in South Africa, is expected to release its phase-3 data this week. That should give another clue, as it could compare the prevalence of disease with trial participants in the US.

The BioNTech/Pfizer vaccine also works against the UK-discovered B.1.1.7 but has not announced test results against the variant that emerged in South Africa.

Anthony Fauci, director of the National Institute of Allergy and Infectious Diseases, said he did not want people to think the vaccines were not effective against the new variants.

“However, we really need to make sure that we begin, and we already have, to prepare, if it’s necessary, to upgrade the vaccines,” he told NBC News on Monday.

Moderna is working with the US National Institutes of Health on the trials. Mr Bancel said a few thousand trial participants would be given a booster shot, divided into two groups: one to receive the original vaccine again, and another to get a new vaccine formulated to target 501.V2. The trial will also test to see what dose is needed for a booster.

Regulators may be able to approve a new vaccine just based on a “bridging study”, which examines participants’ antibodies to the new variant after taking a booster, rather than a lengthy phase-3 trial, which counts how many develop Covid-19 in each trial arm.

A group of scientists in South Africa said this month that vaccines could be less effective against the 501. V2 strain, because it has an extra mutation in a key part of the spike protein that the virus uses to enter human cells.