Nancy Pelosi ‘optimistic’ about prospects for US stimulus deal

Nancy Pelosi, the Democratic speaker of the House of Representatives, said she was “optimistic” about a fiscal stimulus deal after the Trump administration made...

Nancy Pelosi, the Democratic speaker of the House of Representatives, said she was “optimistic” about a fiscal stimulus deal after the Trump administration made concessions on coronavirus testing and tracing ahead of an imminent deadline to reach a compromise.

Ms Pelosi had said she would wait until Tuesday evening for “clarity” from the White House on whether an agreement was possible before the election on November 3 to plough as much as $2tn in new government spending into the US economy. Ms Pelosi was expected to speak with Steven Mnuchin, the US Treasury secretary, on Tuesday afternoon for a last-ditch round of talks.

She pointed to some encouraging signs. “I’m optimistic because I do think we have a shared value — not many — but a shared value that finally they want to crush the virus,” Ms Pelosi said on Bloomberg TV, adding that this marked a “change” compared to the weekend.

The breakthrough on the funding and policies for coronavirus mitigation measures does not guarantee that a deal would be reached, however. Ms Pelosi said there were still disagreements over worker safety, with the White House pushing for liability protections for businesses, and funding for state and local governments, which many Republicans have adamantly resisted throughout the negotiations.

Economists and investors have been closely tracking the fate of additional stimulus measures for the US economy for months, amid hopes that it could help sustain the recovery from the pandemic shock in the world’s largest economy. An agreement is expected to include a new round of direct payments to most US families, up to $1,200 an adult, as well as additional funding for jobless benefits and small business relief.

The upcoming November election has elevated the political stakes in the negotiations and complicated the prospects for an agreement. 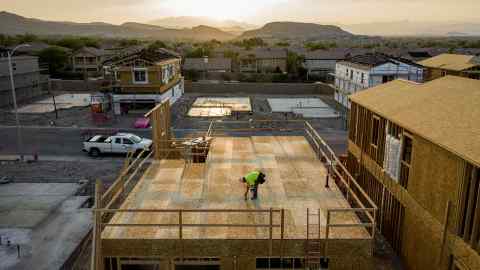 Mr Trump has gone back and forth on the need for additional relief measures — after abruptly pulling out of the negotiations earlier this month, he later urged Republicans to “go big” and seek a large deal. But many Republican lawmakers have been sceptical of the need for a large spending package.

If Ms Pelosi and Mr Mnuchin reach an agreement, it is widely expected to pass the House, which is controlled by Democrats, but could still face serious hurdles in the Senate, which has a Republican majority and may not deliver enough votes for passage.

If no agreement is reached before the November 3 election, the push for a deal may lose momentum, depending on the outcome of the race. Joe Biden, the Democratic nominee for president, has vowed to pass new stimulus measures as a top priority if he wins the election. However, if the former US vice-president is victorious, he would not take office until late January, which would leave the economy in limbo for many weeks.