Oil traders braced for balancing act in wake of US election

The US presidential election looks like a binary choice for the energy sector: an incumbent who has championed the fossil fuels industry or a...

The US presidential election looks like a binary choice for the energy sector: an incumbent who has championed the fossil fuels industry or a challenger who has vowed to overhaul the world’s largest economy to meet the threat posed by climate change.

Yet oil traders are increasingly cautious about casting US president Donald Trump as bullish for prices and Democratic opponent Joe Biden as bearish, warning that the potential outcome is far more nuanced than it appears on the surface.

“Oil traders know they need a bit of humility on this,” said Helima Croft, global head of commodity strategy at RBC Capital Markets. “What’s good for the oil industry isn’t always good for the oil price and vice versa.”

The coronavirus crisis and the related crash in oil prices have muddied the picture ahead of the November 3 vote. Crude prices have been on a wild ride in 2020, with the demand-sapping pandemic knocking crude down to near $40 a barrel compared with $60 a barrel last year.

A Biden administration could patch up the Iran nuclear deal, freeing more of the Opec member’s barrels from US sanctions — with that extra supply weighing on an already saturated market. Mr Biden’s support for remaining in the Paris climate agreement and kick-starting a move away from fossil fuels could also eventually chip away at US oil consumption.

“Trump is status quo and people know his policies, but Biden will be very different, with a green energy push and likely a big commitment to the Paris deal,” said Amrita Sen at Energy Aspects.

“But it’s Iran where the market is going to focus, so a Biden win is bearish for oil prices immediately.”

But further out, the calculations change. Rapidan Energy’s Bob McNally, a former adviser to US president George W Bush, said that while he would expect oil prices to fall in 2021 under a Biden presidency, he saw the Democratic candidate’s decisions boosting crude in the longer term.

Mr McNally said the market would “quickly” price in the return of Iranian oil. “But in the longer term, I believe a Biden presidency would be very bullish for the oil price as the industry will be starved of investment.”

An accelerated push towards clean energy would make investors less willing to fund oil exploration and development, added Mr McNally. That could lift the cost of capital for producers and choke off supply, he said.

There is a growing consensus that oil will hit peak demand in the coming years, but many believe consumption will plateau after that point, rather than falling rapidly.

Output rates at existing oilfields, meanwhile, are already declining by 2-6 per cent a year, according to industry estimates. That means the industry may need to keep investing in new sources of supply even if oil consumption does not reach far above the 2019 record of 100m barrels a day. European energy majors like BP are already saying they will produce less oil in the future.

Policy moves could encourage the fall in production. Though Mr Biden has ruled out a blanket ban on fracking if he wins next week’s vote, he has pledged to put a stop to drilling on federal lands. Such a move could knock US production by 3 per cent a year, Scott Sheffield, chief executive of Texas-based Pioneer Natural Resources, told the FT last week.

If President Trump were to win, analysts expect a continuation of the close relationship between the US and Saudi Arabia, the kingpin of the Opec group of oil producers.

Riyadh was pleased by the scrapping of the Iran deal, and Washington has used that leverage to take an active interest in the group’s production decisions with Russia.

But that has cut both ways for the market. In 2018, the Trump administration lent on the cartel to keep output high and prices in check when he wanted to hurt Iran’s oil exports. Earlier this year, he called on producers to end a price war and slash production, when US shale drillers were screaming for help at the peak of lockdowns.

Ms Croft at RBC said there would still be a “pragmatism” to a Biden administration’s relationship with Saudi Arabia, even if Washington tried to put more distance between itself and Riyadh. 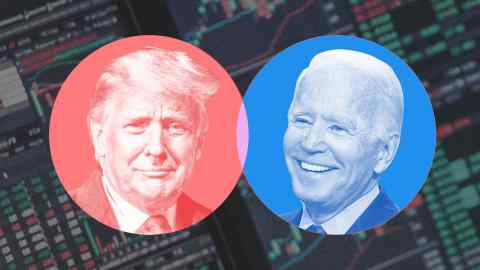 “I don’t think he’s going to deploy the power of the presidency to protect the shale industry,” Ms Croft said. “But he will do for jobs and economic stability, even if it’s not a fabulous friendship.”

When it comes to the pandemic, Mr Trump’s commitment to reopening the US economy and learning to “live with” the pandemic pose less of a threat to near-term oil demand, analysts say. Mr Biden, by contrast, is viewed as more likely to instigate tougher measures to slow the virus’s spread.

“A ‘second wave’ of strict coronavirus restriction measures could be re-imposed . . . should there be a change of power,” said analysts at Rystad Energy. Others make the case that a more robust response to Covid-19 will lead to a stronger recovery later.

Whoever wins, there is the potential of a relief rally — if the result is clean. Like their counterparts in equity and bond markets, traders’ big fear is a disputed outcome that sparks a sell-off.

But ultimately there is a recognition that the oil price, despite public perception, can be beyond a US president’s control.

“It’s worth remembering that Obama was very good for the oil industry, largely by accident,” said Paul Sankey, a veteran oil analyst and head of Sankey Research. “And Trump has been very bad for oil despite his best efforts.”