Saudi Arabia has said that relations with the US will not be hurt by the Biden administration’s release of a US intelligence report incriminating...

Saudi Arabia has said that relations with the US will not be hurt by the Biden administration’s release of a US intelligence report incriminating the Saudi crown prince in the killing of journalist Jamal Khashoggi.

Prince Khalid bin Bandar, the Saudi ambassador to London, told the Financial Times that the release of the declassified report asserting that Mohammed bin Salman had authorised the capture or the killing of the Saudi journalist in Istanbul was “an internal issue for the United States”. The kingdom was focused “on maintaining our relationship” with the US, he said.

The report, released on Friday, did not present any new hard evidence directly linking Prince Mohammed to the killing. But the US assessment said it was “highly unlikely that Saudi officials would have carried out an operation of this nature without the crown prince’s authorisation,” citing his “absolute control” of security and intelligence agencies.

“It’s an assumption based on an assumption. There’s nothing in that initial assessment that is definitive,” Prince Khalid said.

“We deny their conclusion,” he added, saying the crown prince could not be expected to be “aware” of everything taking place in the kingdom.

Khashoggi, a veteran Saudi journalist who used a column in the Washington Post to criticise Prince Mohammed’s leadership, was murdered by Saudi agents at the kingdom’s consulate in Istanbul in October 2018.

The US intelligence assessment named more than a dozen Saudi officials, including former top aides to the crown prince and members of his Royal Guard as having participated or been complicit in the killing. The release of the report is an embarrassment for Prince Mohammed that has brought fresh scrutiny on his autocratic leadership and human rights record.

Reporters Without Borders, a media watchdog, on Tuesday filed a criminal complaint in Germany accusing Prince Mohammed and other officials of committing crimes against humanity, including the detention of more than 30 journalists. It said it filed the complaint in Germany because its laws recognise the principle of universal jurisdiction. A German court last month convicted a former Syrian intelligence officer of aiding and abetting a crime against humanity.

After releasing the US intelligence report, the Biden administration imposed visa restrictions on 76 unnamed Saudis it believes have threatened dissidents. President Joe Biden has also frozen weapons sales to Saudi Arabia and made clear he will communicate with King Salman, not the crown prince, the kingdom’s day-to-day leader.

But Biden, who threatened to treat Saudi Arabia as a pariah during his election campaign, has been criticised by members of his Democratic party and human rights organisations for not sanctioning Prince Mohammed.

Washington has said it wants to recalibrate its relationship with Riyadh rather than “rupture” it.

The Biden administration wants the kingdom’s co-operation to end the war in Yemen, where Saudi Arabia is fighting Iran-aligned Houthi rebels, and hopes to secure regional support, including from Riyadh, for its Iran policies as Washington seeks to rejoin the 2015 nuclear agreement Tehran signed with world powers. 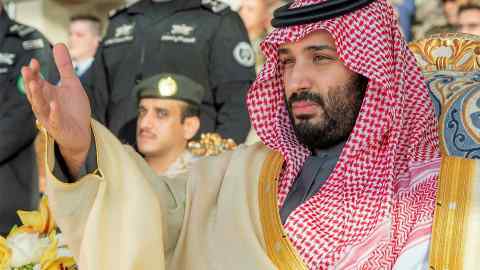 Prince Khalid said it would be a mistake for the Biden administration “to walk straight back into” the agreement that Riyadh opposed. Saudi Arabia argued that the deal failed to address Iran’s missile programme and backing of regional militias.

“We will support anything that brings peace to the region and we think part of that is the nuclear issue. We don’t want an arms race with Iran, but we think it was a flawed deal from the start and that hasn’t changed,” he said. “You have got to tie everything into it.”

He added that Riyadh agreed with Biden on “the need for a political solution for Yemen”.

The war has triggered what the UN describes as the world’s worst humanitarian crisis, and Riyadh has drawn widespread criticism for its role in the conflict, particularly for bombing civilian targets. A western diplomat said both Washington and Riyadh had stepped up diplomatic efforts to end the war in recent weeks.

The Biden administration has said it will maintain pressure on Saudi Arabia to improve its human rights record. On Prince Mohammed’s watch, scores of businessmen, academics, bloggers and activists have been imprisoned as he has crushed virtually all forms of dissent.

Prince Khalid insisted those arrested had broken Saudi law. “We may disagree on what should be a law and what shouldn’t be, but that is the system we have and we are always working to improve it,” he said.

Asked if pressure from the Biden administration would lead to a change in Prince Mohammed’s behaviour, Prince Khalid said: “I don’t see what behaviour has to change.”

“This is a man who has dramatically improved the country in a very short amount of time, who is focused on future development,” he said. “Look at all the positive developments we’ve had: rejigging institutions, social change, cultural change, administrative change.”