Eric Raptosh, 60, suffered brain damage and a neck injury in the July 17 crash near Lake Tahoe. He is pictured on Wednesday in... 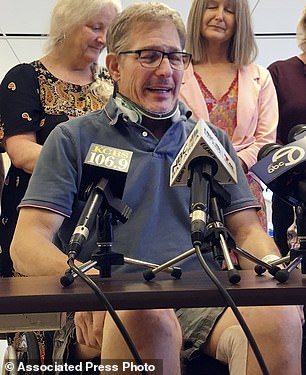 Eric Raptosh, 60, suffered brain damage and a neck injury in the July 17 crash near Lake Tahoe. He is pictured on Wednesday in the hospital, speaking out for the first time since he was hospitalized

The sole survivor of a plane crash which killed two people in Lake Tahoe earlier this summer has spoken out for the first time.

Eric Raptosh, 60, was flying with his husband, Peter Jackson, 55, and pilot Kenneth Whitall-Scherfee, 60, when their single engine plane crashed near Tahoe on July 17 at 7.40am, seven minutes after takeoff.

Scherfee, an experienced pilot, was trying to return to the Truckee-Tahoe Airport when the crash occurred shortly after takeoff.

He reported engine problems almost immediately after taking off in the 67-year-old Navion B fixed wing single-engine aircraft.

Both the pilot and Jackson died and Raptosh was taken to hospital.

On Wednesday, after two months of intensive care and wearing a neck brace, he spoke out about his guilt over surviving.

‘The days were dark, and I just thought, well, I don’t know how this works, but if I stop trying I’m never going to figure out how it works and I would never be here,’ he said at a news conference, sitting in a wheelchair and surrounded by family and staff at Santa Clara Valley Medical Center’s Sobrato Rehabilitation Center. 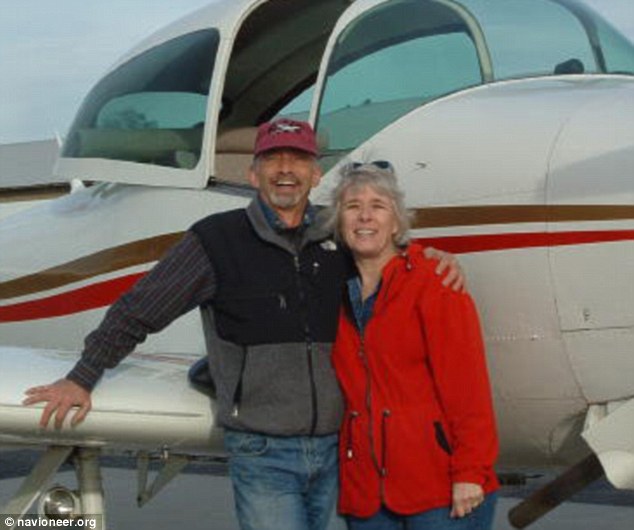 Pilot Kenneth Whitall-Scherfee, 60, (pictured with his wife) was also killed in the crash. It was his plane

‘I feel like myself, very much, sometimes the pain comes and goes, but I really feel like I’m myself, version two. And version two is always better than version one,’ he said, ‘all the bugs are fixed.’

Raptosh is scheduled to leave the hospital Thursday after five weeks of intensive in-patient therapy at the public medical center, which specializes in spinal cord, brain and burn injuries.

He joked about the ‘cheerful people’ who dragged him through hell.

He profusely thanked the medical staff for their support. He said he could not remember the crash.

Officials said the pilot reported engine problems and was trying to return to the Truckee-Tahoe Airport when the crash occurred shortly after takeoff. 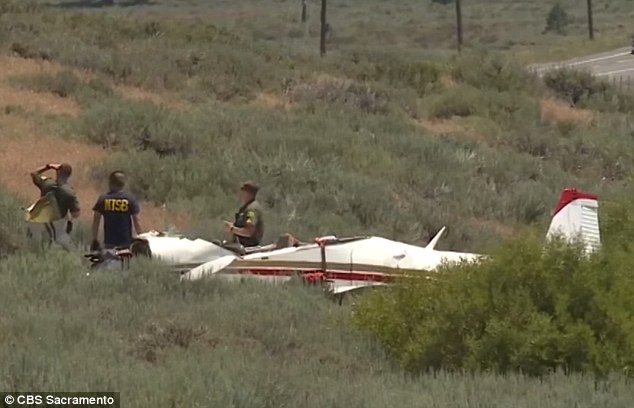 The single engine Navion plane went down just seven minutes after take-off on July 17. The pilot, 60-year-old Kenneth Whitall-Scherfee, was trying to turn back to Truckee Airport at the time 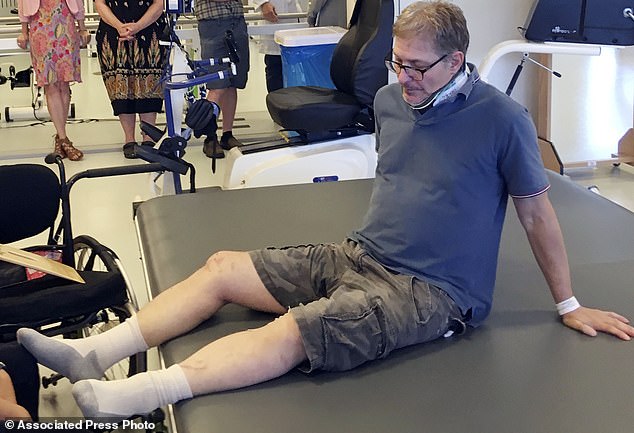 Raptosh is pictured in hospital on Wednesday. He will likely never walk again but is grateful to be alive

Raptosh, a photographer, said he can’t wait to return to his home in Truckee.

He misses the clean air and his friends and said he plans to roll his wheelchair into the middle of the road and look at the stars. 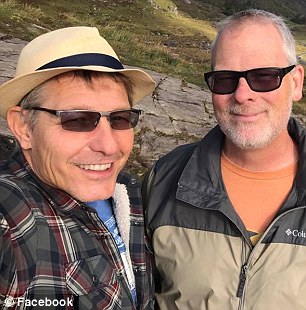 Jackson and Raptosh had recently moved to Idaho but had a home in Truckee, California. They previously lived in West Hollywood. Jackson worked in technology and Raptosh is a photographer

His sister, Diane, wiped away tears as her brother maneuvered from his wheelchair onto a table.

‘The most beautiful parts of Eric are his mind and his spirit, which are thankfully still intact, and he still reminds us that we are not our bodies,’ she said.

Martha Jackson, the sister of Peter Jackson, said the two men were opposites – Raptosh artistic and verbal while her younger brother was logical and efficient.

But together the pair went everywhere and could be counted on to help others, she said.

‘It will be very hard, I think, for Eric to be without him,’ Jackson said. ‘I’m so grateful that he has so many close friends that loved them both,’ she said.

Raptosh and Jackson had been together for 20 years.

They had moved between West Hollywood, the San Francisco Bay Area, Idaho and Truckee and were avid travelers.