Teachers on frontline of France’s fight to defend secularism

In the courtyard of the Sorbonne university in Paris on Wednesday evening, President Emmanuel Macron celebrated the life of a teacher who was beheaded...

In the courtyard of the Sorbonne university in Paris on Wednesday evening, President Emmanuel Macron celebrated the life of a teacher who was beheaded last week after trying to teach his students about free speech.

Samuel Paty was killed after showing his teenage class cartoons of the Prophet Mohammed published in the satirical magazine Charlie Hebdo, itself the victim of a murderous Islamist terror attack in 2015.

The 47-year-old history and geography teacher’s aim in showing the pictures was to spark a discussion around the secular values that underpin France’s Fifth Republic — part of the curriculum taught in every French school.

By striking at a teacher, the 18-year-old Chechen refugee who murdered Paty struck at the heart of France. Since the end of the 19th century in France, schools have been the places where citizens are inculcated with republican values.

After the murder, huge rallies were held with signs held up declaring “Je suis Samuel”. Promising to “raise secularism to new heights”, Mr Macron said on Wednesday that the “creation of republican French citizens, that was the struggle waged by Samuel Paty”.

But for many of the teachers waging that struggle, that vocal support from the state has jarred with a lack of resources afflicting a system they feel has not valued the work they do.

After prime minister Jean Castex said on Tuesday that the school system was “choyée”, or cherished, teachers hit out. A spokesperson for the French teacher’s union said that “cherished is not exactly the lived reality for our teachers”, while on Twitter several sarcastic replies were tagged #jesuischoyée.

Mr Macron has made schools central to his vow to crack down on Islamist extremism and “separatism” in France, including banning home schooling from September of next year.

More than 50,000 children in France are being educated at home, and Mr Macron said that number was increasing quickly, jeopardising the state’s ability to integrate migrant populations living in segregated suburbs.

The French concept of laïcité is at the heart of the integration debate. For its defenders, laïcité — the strict version of secularism behind laws banning headscarves at school which has its roots in a 19th-century struggle that culminated in the passing of the 1905 law on the separation of church and state — guarantees freedom of belief and thought. But for its detractors it has become a vehicle for discrimination against France’s Muslim population.

“There are now those who say that there is an increase in religious pressure in society so we should widen the space where religion doesn’t figure. While there are others who say, ‘no, no, everything is OK, we will keep it as it is,’” said Patrick Weil, a professor at Pantheon-Sorbonne university and author of How to Be French: Nationality in the Making since 1789.

In the previous school year there were 935 reports of “breaches of laïcité”, running from threats to teachers to refusal to engage in some activities. Teachers complain of a lack of support.

The problem facing teachers in France is not new, said Jean-Pierre Obin, a former French national school inspector. He was the author of a 2004 report into “signs and manifestations of religious affiliation in schools”, which was presented to the prime minister at the time François Fillon but, said Mr Obin, never acted upon.

Mr Obin believes three things are needed: an effort to desegregate the suburbs of large cities; more training for teachers, particularly in how to promote secular values; and a way to attract talented people to the upper echelons of the education system.

Only 6 per cent of teachers have been trained in teaching laïcité said Mr Obin, adding that “some 38 per cent teachers self-censor themselves when teaching subjects that might offend, and that number increases to 54 per cent in schools in disadvantaged areas”. 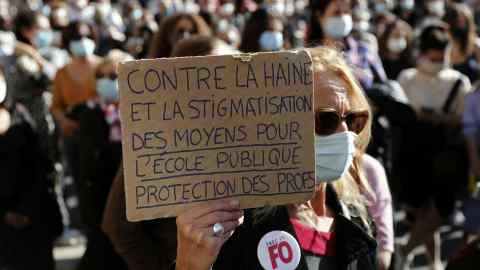 One young teacher of French in such an area, in Nanterre to the west of Paris, agrees that she would routinely self-censor, afraid that she would otherwise face complaints and that her bosses might not back her up.

“No, I don’t feel safe. If I have to show a film with a nude scene or a couple embracing, there’d be shouting, and not just the normal teenage stuff, real aggression, kids saying this is not OK, it’s not allowed,” she said, requesting her name not be used.

“The government talks about how important we are, but we don’t have enough resources. I’ve had to buy my own books, materials. I’ve had to scrounge for money for trips . . . And class sizes keep getting bigger,” she added.

Julien Marsay, a literature and philosophy teacher in another suburb north of the capital, said that “teachers have been earning less and having to work more” and that “students simply aren’t listened to”.

While in the poor suburb of Champigny-sur-Marne to the south-east of Paris, Asma Ashraf, a 46-year-old woman of Pakistani origin who runs an organisation helping families, said that many of the Muslim people around her feel targeted by Mr Macron’s message about separatism.

“Part of the problem is that the parents here don’t always understand what laïcité actually is,” she said.“ The mothers don’t understand when they are told they can’t wear veils on school outings. There needs to be a way to teach this outside of the schools too.”