Turkey’s central bank has left its benchmark interest rate unchanged at its first rate-setting meeting since a new governor was installed, but signalled that...

Turkey’s central bank has left its benchmark interest rate unchanged at its first rate-setting meeting since a new governor was installed, but signalled that it could loosen policy if inflation showed signs of slowing.

The monetary policy committee, chaired by Sahap Kavcioglu since his surprise appointment last month, kept the one-week repo rate at 19 per cent, as expected by economists polled by Reuters and Bloomberg.

In a statement after the meeting, policymakers reiterated their commitment to reducing inflation but omitted the previous administration’s indication of future additional tightening. Kavcioglu’s predecessor Naci Agbal was ousted by President Recep Tayyip Erdogan in March in the wake of a larger-than-expected rate rise.

“The policy rate will continue to be determined at a level above inflation to maintain a strong disinflationary effect until strong indicators point to a permanent fall in inflation and the medium-term 5 per cent target is reached,” the committee’s statement stated.

Turkish inflation has been stuck at double-digit levels for much of the past three years; consumer prices rose more than 16 per cent year-on-year last month.

Kavcioglu, a former academic and newspaper columnist, had indicated he would not immediately undo the previous governor’s hawkish policies, despite previously arguing in favour of the unorthodox theory promoted by Erdogan that higher borrowing costs drive inflation, rather than cool it.

The change in central bank leadership rattled financial markets. The lira has lost a tenth of its value since then, due to investors’ fears that the bank would bow to pressure from Erdogan to lower rates in a bid to fuel economic growth.

On Thursday, the lira fell slightly after the announcement to around 8.1 to the US dollar. 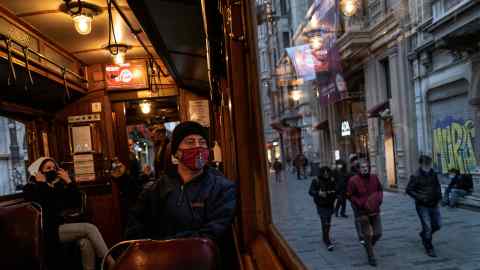 The committee said it would keep real interest rates above inflation, in a change to its previous pledge to maintain tight policy until the inflation target is met.

The decision showed Kavcioglu “will take the inflation target seriously. But the language also suggests that they are looking for opportunities to lower interest rates,” Jackson wrote in a note to investors. “This statement only talked of keeping real interest rates above inflation. With the one-week repo rate at 19 per cent and inflation at 16.2 per cent, that already offers scope to reduce rates.”

Erdogan said last week he was determined to reduce both interest rates and inflation to single digits.

Kavcioglu is the central bank’s fourth governor in under two years. Erdogan has not offered a reason for firing Agbal, who raised rates by a cumulative 8.75 percentage points in the four months he held the post.

The committee’s statement also stated it “will continue to use decisively all available instruments in pursuit of the primary objective of price stability” and acknowledged risks remained for inflation due to demand and costs and supply issues in certain sectors.

Barclays analysts said in a note: “The risk of a premature cut has increased substantially following today’s statement. We are also not sure that the commitment to keep the policy rate above inflation would suffice to anchor expectations.”