ANCHORAGE, Alaska (AP) – A pilot flying in rapidly deteriorating weather in Alaska confused snow on a mountain with a body of water before...

ANCHORAGE, Alaska (AP) – A pilot flying in rapidly deteriorating weather in Alaska confused snow on a mountain with a body of water before crashing a floatplane with 10 passengers onto the rocky mountainside, a preliminary report released Wednesday says.

All 11 people on board the flight survived the July 10 crash of a Taquan Air charter flight on Prince of Wales Island near the southern tip of the Alaska Panhandle. Six people suffered serious injuries.

The pilot told an investigator that visibility decreased rapidly from about 3 to 5 miles (5 to 8 kilometers) to nothing while the plane was cruising at 1,100 feet (335 meters), according to the preliminary report by the National Transportation Safety Board. In this July 10, 2018 photo, Coast Guard Air Station Sitka MH-60 Jayhawk helicopter crews rescue people after a float plane crashed southwest of Ketchikan, Alaska, on Prince of Wales Island. All the people aboard a plane that crashed Tuesday have been rescued in mountainous terrain, officials said. (U.S. Coast Guard via AP)

The pilot of the de Havilland Otter started a climbing right turn, hoping to reverse course so he could keep flying under visual flight rules.

“He saw what he believed to be a body of water and he became momentarily disoriented, so he leveled the wings,” the report said. “Shortly thereafter, he realized that the airplane was approaching an area of snow-covered mountainous terrain, so he applied full power and initiated a steep, emergency climb.”

However, the airspeed “decayed” and the plane’s floats struck Jumbo Mountain and were sheared off before the plane came to rest with substantial damage to the wings and fuselage, the report says.

A passenger in the front seat later told an investigator that the pilot had made numerous course deviations to maneuver around weather and at times briefly lost visibility.

“He said he became uncomfortable and was thinking it would be prudent to just land on the water,” the report said.

A second passenger seated toward the back of the aircraft texted the first passenger and told him to ask the pilot to land and wait for weather to improve.

Both passengers saw the mountain and felt the airplane add power just before the crash.

Alaska State Troopers contacted the Coast Guard and the Ketchikan Volunteer Rescue Squad. Private helicopters from Ketchikan attempted a search but reported low clouds and poor visibility at the upper levels of the mountains.

About three hours later, Coast Guard helicopters reached the crash site at 2,557 feet (780 meters). It took a little more than an hour for the rescuers to hoist everyone out.

The pilot was not named in the NTSB report. However, Alaska State Troopers last week reported that Mike Hudgins, 72, of Ketchikan was at the controls.

The flight departed from a lodge at Steamboat Bay on remote Noyes Island. It was bound for Ketchikan, a regional hub with jet service.

Taquan Air President Brien Salazar in a statement said the company continues to cooperate with the investigation to understand how the crash occurred and make sure it’s not repeated.

The pilot is not eligible to fly for Taquan at this time, he said.

“This follows our company protocols and there is no existing timeline for reinstating his status,” he said.

The report noted that the pilot had inhibited the airplane’s Terrain Awareness and Warning System, which gives alerts or jarring audio warnings when an aircraft flies too near the ground.

The NTSB at an August hearing in Anchorage received testimony that pilots flying with visual flight rules in Alaska routinely inhibit TARS when they fly at lower altitudes when the cloud ceiling is low to avoid a continuous, distracting warning. The NTSB recommended that the Federal Aviation Administration find ways to provide effective terrain awareness while mitigating nuisance alerts.

Salazar said the issue remains important and that Taquan Air wants to work with the FAA and other operators to address it. 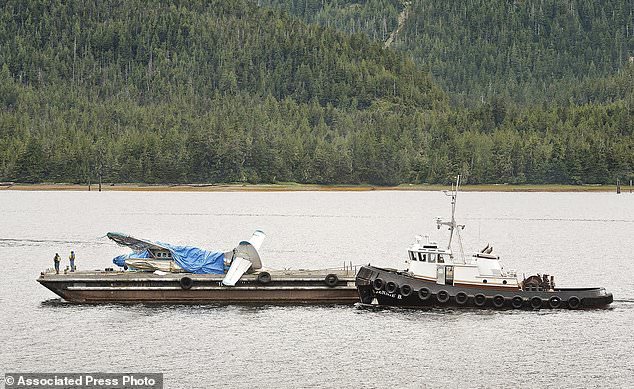 This Saturday, July 14, 2018, photo shows a Taquan Air plane that was involved in a crash July 10, 2018, on Prince of Wales Island being barged into Ketchikan, Alaska. The pilot of the charter plane that crashed told investigators he initially confused the snow-covered slopes with a body of water in deteriorating weather conditions. The 72-year-old pilot initiated a steep, emergency climb but the airplane struck terrain, according to a preliminary report released Wednesday, July 18, 2018, by the National Transportation Safety Board. (Dustin Safranek/Ketchikan Daily News via AP)