Xiaomi Mi Router 4C has been announced in China. The new router comes as a new variant of the fourth-generation Mi Router that was...

Xiaomi Mi Router 4C has been announced in China. The new router comes as a new variant of the fourth-generation Mi Router that was launched earlier this year. Xiaomi has provided 64MB of onboard memory on the Mi Router 4C alongside a smart APP management. The router also features four omni-directional antennas, similar to the original Mi Router 4. It comes with a price tag of CNY 99 (roughly Rs. 1,000). This is identical to the price of the Mi Router 4.

Xiaomi will start selling the Mi Router 4C in China on July 30. Its sale will begin at 10 am via Xiaomi Mall, Xiaomi Youpin, Mi Home, and TMall, as noted by Chinese publication MyDrivers. The router features four omni-directional antennas and comes in White colour option. The design of the new router matches the Mi Router 4. Also, there is 64MB of memory. In comparison, the Mi Router 4 had 128MB of DDR3 RAM and NAND flash storage. The router also comes with a smart APP management that is expected to help enable remote operations through an Android or iOS device. 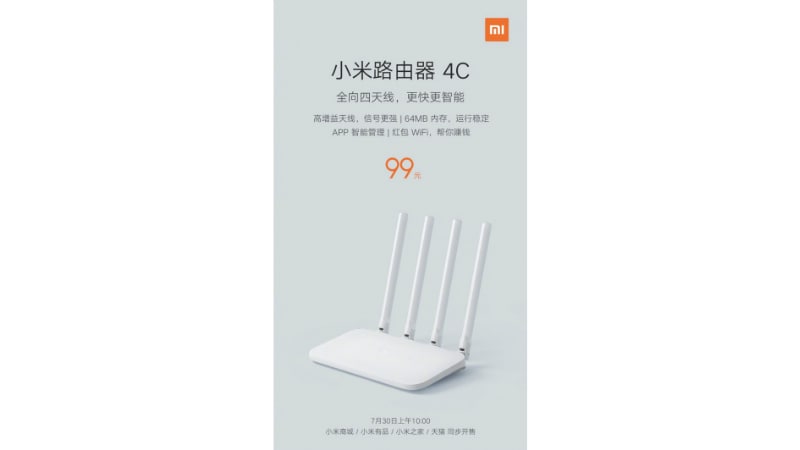 Data transfer speeds of the Mi Router 4C are yet to be revealed. Similarly, the range of the new model is undefined. Considering the reported details, it may deliver an experience similar to the Mi Router 4, though.